On reflection and when visiting somewhere for the first time with what I feel to be an open mind I often find myself leaving with a sense of having been taken by something – yes – unexpected!  Open mind huh!

This was the case during a recent visit to the gem museum in Idar-Oberstein near Frankfurt.  I’ll maybe chat a little about Idar in a later post, suffice to say it is home to this gem museum and appropriately so given its historic status since the 15th Century as a centre for mining agate and, many would argue, the global epicentre for fine semiprecious stone carving. 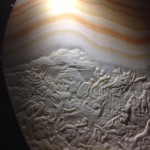 words and by showing a handful I hope you will get a feeling for the exceptional levels of skill and creative vision upon which, over the generations, the name of the ‘River Idar’ has become synonymous.

Among all the beautiful works there was in one room a row of cabinets displaying worked and ‘rough’ specimens of emerald, ruby, sapphire, beryl, lapis lazuli, turquoise and many others types of precious and semi-precious stones – all marked ‘Synth’. Rather un-inspiringly displayed I passed on, returning to it having completed my ‘tour’ with a slightly troubled feeling of having missed something. I couldn’t dally as it was past closing time but I did take a couple of quick pictures. 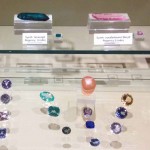 ‘Ja, Ja, of course’ explained the very kindly attendant in her limited English as she shepherded me out, ‘it is material made in a factory, synthetik’.

I am sure most of you are more worldly wise than I but I suspect there may be some who like me were unaware as to the extent of industry’s capability to manufacture precious stones – sapphires, emeralds, ruby’s, diamonds – all flawless and created to any desired colour or shade, not to mention a range of 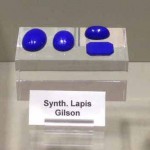 the more  prized semi-precious stones. A sort of modern day alchemy – all being used for jewellery manufacture and, in the case of diamonds for industrial applications as well. Desirable to makers of jewellery because they are cheaper – and consistent in, dare I say it, quality.

I have to confess I was rather shocked, perhaps naively. The romantic notion of a piece of material that has been sheltered for millions of years, unearthed and shaped by the hand of man into something beautiful – shattered! And the fact that it is flawless – manufactured perfection – the perfect 10, the

unblemished complexion on a photo-shopped face….. Is it a fraud or is it not? However strong the connection will someone in years to come be disappointed when they are told that their magnificent sapphire is synthetic? It can be detected using sophisticated spectroscopy techniques.

In some way it seems different to the production of pearls in culture – the cheapest a mere few microns of pearl on a plastic bead. Is that what it will come to – the laying down or fusion of a layer of material onto a cheap base of the same refractive index?  Who knows – this may be the future of mass production jewellery.

Sitting on my workshop table when I returned home, alongside a Lapis dome I’d fashioned during training, was a pair of ‘practice’ cufflinks I’d also made using a small piece of rough Lapis Lazuli. Revealed only when it was cut were irregular inclusions of calcite and a scattering of golden pyrite flecks in such a pattern as to give it an almost celestial appearance – like a tiny picture a child might imagine taken in the depths of space. 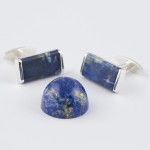 I looked at my dome and the Lapis in the cufflinks against the photograph of the even coloured and flawless synthetic materials I had seen in the museum and thought, this is nature, this is uniqueness, these pieces have an identity. Celebrate the difference and hats off to natures wonderful, surprising, beautiful, at times exasperating for the designer – but perfect ……. IMPERFECTION!!  Or should that be Imperfect Perfection